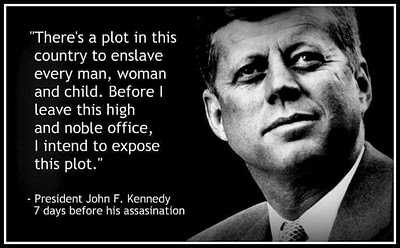 The war between Republicans and Democrats is a war between good and evil. Between David and Goliath.George Washington was not a member of any political party. In his farewell address September 17, 1796 he warned about political parties, he said:"However [political parties] may now and then answer popular ends, they are likely in the course of time and things, to become potent engines, by which cunning, ambitious, and unprincipled men will be enabled to subvert the power of the people and to usurp for themselves the reins of government, destroying afterwards the very engines which have lifted them to unjust dominion."        John Kennedy also warned about this conspiracy, “That would enslave every man woman and child in America.” He was assassinated by this socialist conspiracy a week later. The same secret societies (Knights of the Golden Dawn) that assassinated Lincoln and backed the Civil War, and attempted the assassination of Ronald Reagan.

August 13, 2020
politicians      Center for American Liberty (CAL) is a network of lawyers in support of American Civil Rights, is suing teachers unions. The Communist run National Education Association which recommends Communist Saul Alinsky’s book on how to Socialize/Communize America. Hillary and Obama are his disciples. In that book he praises Lucifer for his rebellion.They are also suing Yale for discrimination against Europeans and Caucasians. Yale is where the Illuminati group called Skull and Bones is which supports globalists including the Bush ex-presidents.CAL are suing the California’s Democrat Governor Gavin Newsom for keeping the schools closed refusing to follow the plan to reopen after health officials say it is safe.The Communists want to keep small businesses, churches, and schools closed as long as possible. To use it against Trump and Conservatives, to bankrupt the workers, bankrupt small businesses, bankrupt the country, and close churches. No doubt till after the electio…
Post a Comment
Read more

UFOs Preparing For the Invasion

August 12, 2020
New discovery. There is a new series on History Channel. UFOs in America.Government agents have been investigating the possibility of them being a threat to national security.I have posted a UFO Hotline on CraigsList under groups and it is deleted within a few seconds. However, I can post it under Event Services which charges $5. Apparently they cannot delete a paid ad.Now I know Yahoo is part of Fake News 75% of their "news" is slander against Trump. And when I post a question like Have UFOs posed a threat?, or Have UFOs caused accidents? It always comes up There Was a Problem come back later. They are censoring the threat UFOs pose to people. This proves they ARE A THREAT. My mother and I saw a UFO in 1955 when I was 8 years old in Pasadena in the area of JPL (founded by UFO contactee Jack Parsons). And we came to the conclusion they are Fallen Angels posing as aliens in preparation for the coming of Antichrist and the New World Order.
Post a Comment
Read more

August 11, 2020
Remember the establishment media is a propaganda agent run by the Council on Foreign Relations an organization run by Illuminati/Communists at the United Nations for a world government under Antichrist. Most of the News is written in New York from invented news to their network. Most is fiction. The Democrats said the pandemic was only as bad as the normal flue in January, when Trump shut down our border. Then in March they have hyped it as a mass killer by the Fake News. Most of the information is false or exaggerated.The pandemic is being used to close down businesses, and destroy our economy as well as the world to create a Marxist world government and stop Trump from Making America a Successful World Power Again!Listen to MaxNews, New American Magazine, Jerusalem Dateline, Huckabee, the Bible, and National Rifle Association Magazine - Freedom, Epoch Times, and Fox News?
Post a Comment
Read more

The Communist Conspiracy Against America

August 09, 2020
Here is a Secret Service for Obama Administration exposing to conspiracy by the Obama/Clinton gang against Trump. He reveals their connection to Russia and China Communists to destroy America. The biggest conspiracy is American History.https://www.facebook.com/dan.bongino/videos/580701175865365
Post a Comment
Read more

August 09, 2020
There was a program on the History Channel on Nostradamus prophecies. I have not believed in this occult type information. However he was right about Neapolitan and Hitler (Histler? Hissssler like a snake?). In my research I have identified them as reincarnations of the Antichrist through history. I believe Satan has possessed world leaders throughout history from Cain to Nimrod, etc. But the next one will be far worse! And the media is programming people to accept this Satan possessed man as their savior in contact with extraterrestrial aliens evolving on another planet. Evolution is a lie. The evidence shown by UFO phenomenon shows they cannot be physical objects of entities, they violate the laws of physics.Since Nostradamus is right about many things I believe he got most of his inspiration from reading the Bible.The program was wrong in a few points. They could not determine if the third Antichrist would come from the Muslims, Russia, or China. The Bible says he will be from the …
Post a Comment
Read more

August 07, 2020
Some alternate social sites are no good, including SocialCross and MeWe. The best one is Minds. You can invite members of your Facebook to join you there. And they reach the public! Facebook/Twitter has a monopoly that needs to be broken by competition by the free enterprise system. Or we will have to sue them and/or bring anti-trust laws against them.
Post a Comment
Read more
More posts